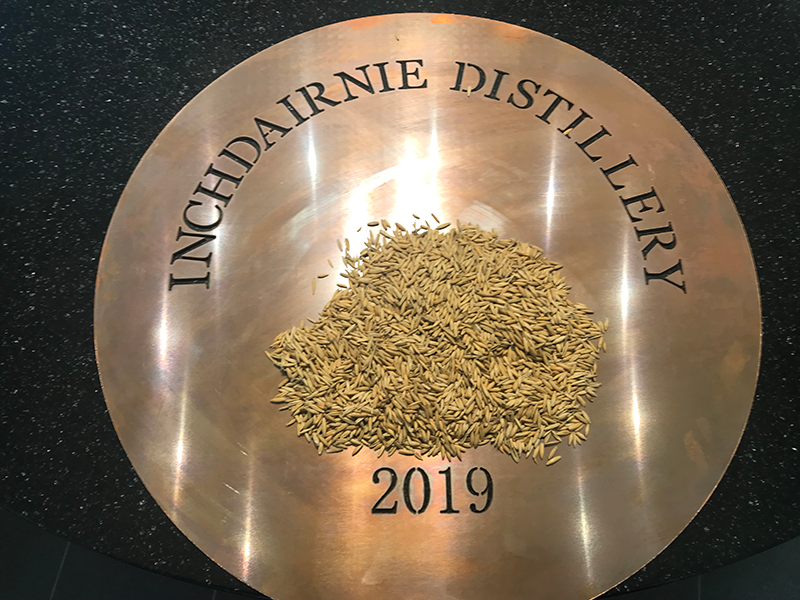 The Prinlaws Collection will be a collection of unique flavour-led distillates from different yeasts, cereals and oaks. Every year up to two weeks are isolated for one off single campaign distillations at InchDairnie Distillery – distillations that may never be repeated, meaning PrinLaws bottlings have the potential of being some if the rarest distillates to come out of Scotland.

Our oats distillate is the first chapter in the PrinLaws Collection from InchDairnie Distillery and features a mash bill primarily of malted oats to deliver a different flavour. There is no definition for whisky made from oats, so InchDairnie has borrowed the American definition of rye whiskey and bourbon whiskey and applied it to whisky made from oats, meaning that a minimum of 51% of mash bill must be from oats – Only the distillation of oats is so unusual that there is no legal definition of oat whisky in Scotland, Ireland nor North America, so InchDairnie Distillery is leading the definition. Maltsters Thomas Fawcett & Sons of Castleford have supplied the malted oats which is mixed with some malted barley, while AB Mauri has been a close partner for InchDairnie Distillery in the development of the exact, but secret, yeast recipe to bring out the best flavours from oats. The spirit will be matured in a combination of American oak ex-bourbon barrels and Portuguese Muscatel casks. When it is ready we do not know, but we will adhere to our philosophy of only releasing when it is ready.

Using malted oats is inspired by the historical use of oats in Scotch Whisky and by managing director Ian Palmer’s focus on using innovative technology and thinking to maximize flavour. Finding historic proof of the use of oats for whisky is difficult, but the inspiration comes from the InchDairnie process equipment, the innovative hammer mill and mash filter combination, that can handle grain beyond standard malted barley – and equally important from the history archives; Ian Palmer discovered evidence in the 1908-09 Royal Commission Report on Whisky and Other Potable Spirits that oats were used to make Scotch.

The new distillate from InchDairnie Distillery is ground-breaking in that there is no Scottish law for specifically naming a whisky made of oats. As such under current rules the only official term for a whisky made from oats is “Single grain Scotch whisky”, despite this being distilled first in a copper pot still, followed by spirit distillation in their Lomond still. Named after the hills behind InchDairnie the Lomond still is the only one of its kind in Scotland. Made of copper and shaped like a normal pot still it hides six plates in the neck which combined with a reflux opportunity mean that spirit can be drawn off the still at only one specific strength – the exact spot where thorough research has identified the most flavoursome liquid. The Lomond still is not used for InchDairnie single malt distillates but is used only for the experimental series Prinlaws Collection as well as the annual rye based distillate, appropriately named RyeLaw.