At InchDairnie Distillery they admit the idea of distilling wheat at a malt distillery is so new that there is not even an official specification in Scotland that describes the product yet. Despite the fact it is distilled through copper pot stills, Scottish legislation allows the very limited official description of Grain whisky. Had it been made in the USA it would be called Wheat whisky. On the other hand, it will be maturing for 8-10 years before it is released – perhaps Wheat whisky is an official term by then.

Certainly, InchDairnie Distillery is pioneering. They have already been distilling rye for years (this can still not be called rye whisky according to Scottish law) and in 2019 they were also the first for over a century to distil oats. The reason? They say they are doing it for the flavour and having a hammer mill and a mash filter allows them to work with grain types normally beyond boundaries of a standard malt distillery. This is probably why the world’s leading whisky writer Dave Broom describes the distillery like this “In terms of flavour innovation, other distillers will be looking at InchDairnie Distillery for years to come.”

Wheat is often seen as the quiet partner in a bourbon or Tennessee mash bill as opposed to the spicier rye. But add wheat and dial it up to 56% of the mash bill like they have done at InchDairnie Distillery in Fife for one week only and the result is astonishing. As distillery manager Scott Sneddon explains, “The malted wheat delivers grainy, biscuity and earthy notes. We reach this through a unique yeast recipe (from Mauri) and precision distillation in our Lomond still” – a still type made for InchDairnie, used only during experimental weeks and named after the Lomond Hills behind the distillery. 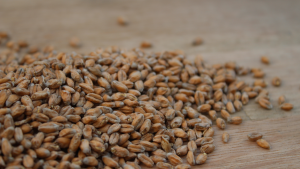 InchDairnie’s wheat whisky is the only wheat whisky in the world distilled in a Lomond still. The Lomond still has six bubble plates inside its neck. As opposed to standard pot stills (which InchDairnie also have for the distillation of their single malt which may be released in 2029) Scott Sneddon explains “…We can run the Lomond still at one specific strength throughout distillation – this will be where we, through extensive research, have found the optimum flavour spectrum”. This is the definition of precision distilling.

Did you know…
• While the wheat whisky may not officially yet be called a wheat whisky, it is expected to be released in 8-10 years under the name PrinLaws Collection Wheat Edition by InchDairnie Distillery.
• Every year, InchDairnie sets aside up to two weeks of experimental distillation in the production diary. The research and development up until these annual experimental weeks will often take many months, sometimes years before being carried out on a big scale.
• Despite being almost six years old, InchDairnie Distillery has quite unusually not released a whisky yet. Whisky will not be released from the distillery until it is deemed ready and mature.
• The first release form the distillery will be a rye whisky called RyeLaw, named rather appropriately after a nearby farm.
• InchDairnie Distillery is on the outskirts of Glenrothes in Fife where the two springs Flowers of May and Goatmilk Hill meet.
• The name InchDairnie means, “The low-lying (or secret) land close to water”.

• InchDairnie Distillery does not have a visitor centre, “We are too busy making whisky” as a sign rightly proclaims at the entrance.
• One way of visiting the InchDairnie Distillery is purchasing one of the 30 casks released to the public every year. The buyer can visit with friends and family, and will receive two samples per year (one to share and one to keep) from the cask. The samples can be placed in the luxurious wooden sample trunk all owners receive along with copper stencil (the size of a
cask end) weighing in at almost 2 kilos.
• A cask at InchDairnie currently costs £12,000, the most expensive from a Scottish distillery – but unusually bottling is included, as is an official tasting in your home. For more information please contact Katie Palmer
at katie.palmer@inchdairniedistillery.com