“Sour Mash” … a pair of words normally associated with the USA where many, if not most, bourbon and Tennessee distilleries use the sour mash method in the making of their whiskeys. Well, prepare for Fife-based distillery InchDairnie to once again challenge conventions. They have just distilled the first Sour Mash Single Malt Scotch whisky and thereby adds to a long list of “firsts” such as distilling oats, rye and wheat.

But while many may have seen “sour mash” printed on a Tennessee whiskey label, what does it entail? Pioneered in the first half of the 1800s sour mash, or back set, describes a way of controlling pH (making it more sour), thus tackling bacteria (in hotter climates) in fermentation that can result in off-notes and inconsistency of flavours in a mash bill, that could contain any combination of malted barley, wheat, rye and maize.

Normally you get a sweet liquid after mashing the grain. The liquid (wort) is then fermented and distilled. In hot climates such as summers in Kentucky and Tennessee, bacteria growth can be a danger in the sweet liquid. Therefore, a portion of pot ale, acidic (or sour) liquid left over from the first distillation, is taken, and added back to the mash, thus lowering the pH value, creating a difficult environment for bacteria, controlling consistency and relating each subsequent batch the previous – a bit like sour dough bread making.

In Fife and Scotland in general hot weather is not a challenge, so at InchDairnie Distillery the sour mash is done after many months of research with a specific yeast recipe only for the sake of flavour. The sour mash method applied at InchDairnie creates more esters, essentially increasing the fruitiness.

Distillery Manager Scott Sneddon explains, “Changing the mash pH changes how the yeast works, which results in a different flavour profile of the spirit. The esterification works better in a more acidic environment, so we get more esters.” He continues, “This is done through replacing some of our mash in water with some pot ale in our mash conversion vessel.” This is not just done on a whim but through months of research experiments carried out with lab partners Tatlock and Thomson, showing the extent the pH would reduce while the wash (beer) ferments. Armed with this information the next step was to work closely with yeast partner and supplier Mauri to find the right yeast recipe that would tolerate this low pH and still keep fermenting. 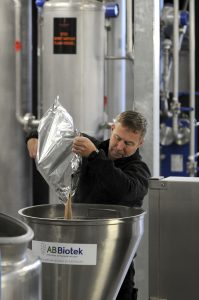 After initial experiments this was then carried out on a big scale at InchDairnie Distillery last week. Sour Mashing leading to high estery wash which in turn was double pot distilled and quadruple condensed for more copper contact before being laid down, as an expected one off, to mature for the next 8-10 years, when it is expected to be bottled under InchDairnie Distillery’s experimental brand PrinLaws Collection.

When the sour mash method is used in Kentucky and Tennessee it is usually with a mix of grains. At InchDainrie only 100% malted barley was used for the process – so we believe this is a single malt (it is 100% malt distilled at a single distillery). A Sour Mash Scotch Single Malt?